Space: the final frontier. These are the voyages of the starship Enterprise. Its five-year mission: to explore strange new worlds, to seek out new life and new civilizations, to boldly go where no man has gone before.

I am an original Trekkie and very proud of it! I treasure my memories of sitting in anticipation on the floor in front of the tv on Friday nights, watching Kirk (William Shatner), Bones (DeForest Kelley), Spock (Leonard Nimoy), “Scotty”(James Doohan), Sulu (George Takei), Chekov (Walter Koenig ), Lieutenant Uhura (Nichelle Nichols) and the crew of the Starfleet starship USS Enterprise begin their adventure and “boldly going where no man has gone before.”(I was very pleased when they acknowledged the sexist nature of the tagline and changed it from no man to no one.)

Wow, what a statement! In 1966, an authentic representation of an international crew. Radical stuff which showed the brilliance and social awareness of creator, the late Gene Roddenberry.

(Introduction to pilot “The Cage”)

Jeffrey Hunter as Captain Pike was actually the first captain of the USS Enterprise in the original Star Trek pilot episode, “The Cage“. The original pilot was broadcast on September 8, 1966. Leonard Nimoy as Mr. Spock was on board by his captain’s side as well as Majel Barrett (Number One), who went on to portray Nurse Chapel, the recognizable voice of most onboard computer interfaces throughout the series and later become Roddenberry’s 2nd wife.

Set in the 23rd century, the series would evolve to follow the adventures of Captain James T. Kirk (William Shatner) and his crew who were charged with solving intergalactic conflicts without interfering in the planet’s culture. This vehicle was Roddenberry’s method of initiating dialogue around controversial human and sometimes not so human, issues such as racism, technology, war.

I’ve always been of the mind that art is revolutionary. The great Renaissance masters like DaVinci, and Michelangelo, were considered subversives in their time. They had to hide their political messages inside their remarkable works to keep from being prosecuted. In his way, Gene Roddenberry could be considered a “Renaissance Man”.

Roddenberry had a vision that we can co-exist in a multicultural, multinational world and, as an eleven-year-old black girl from the east side of Detroit, I was right there with him. I had the same dreams and beliefs for my future.

My favorite Star Trek episode would have to be “Space Seed” (Season 1, Episode 22) with Ricardo Montalbán as Khan Noonien Singh.

It was first broadcast on February 16, 1967. The storyline was written by Gene L. Coon and Carey Wilber, and directed by Marc Daniels. The plot explored the concept of Eugenics,”super-intelligence and the result of creating a group of “superpeople” (from Earth’s past) bred to conquer the world.

The subsequent 1982 film Star Trek II: The Wrath of Khan was a brilliant sequel to “Space Seed” as we find out what subsequently happened to Khan and his people on the planet to which Kirk banished them.

The film ratcheted up the intensity of the television episode proving to be a full-out sci-fi thriller which I give 2, very enthusiast, thumbs up!

The series was produced from September 1966–December 1967 by Norway Productions and Desilu Productions, and by Paramount Television from January 1968–June 1969. Star Trek aired on NBC from September 8, 1966, to June 3, 1969, and was actually seen first on September 6, 1966, on Canada’s CTVnetwork. 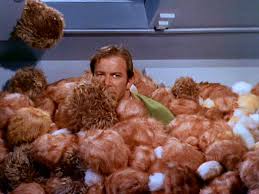 Star Trek‘s Nielsen ratings while on NBC were low, and the network canceled the show after three seasons and 79 episodes. Several years later, the series became a bona fide hit in broadcast syndication, remaining so throughout the 1970s, achieving cult classic status and a developing influence on popular culture.

Although we’ve lost some light over the years with the passing of those who loved, crafted and inspired us with Star Trek’s spirit, the sentiment lives on.

May they all rest in peace. 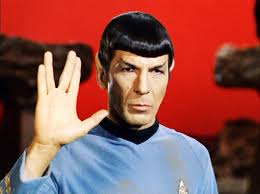