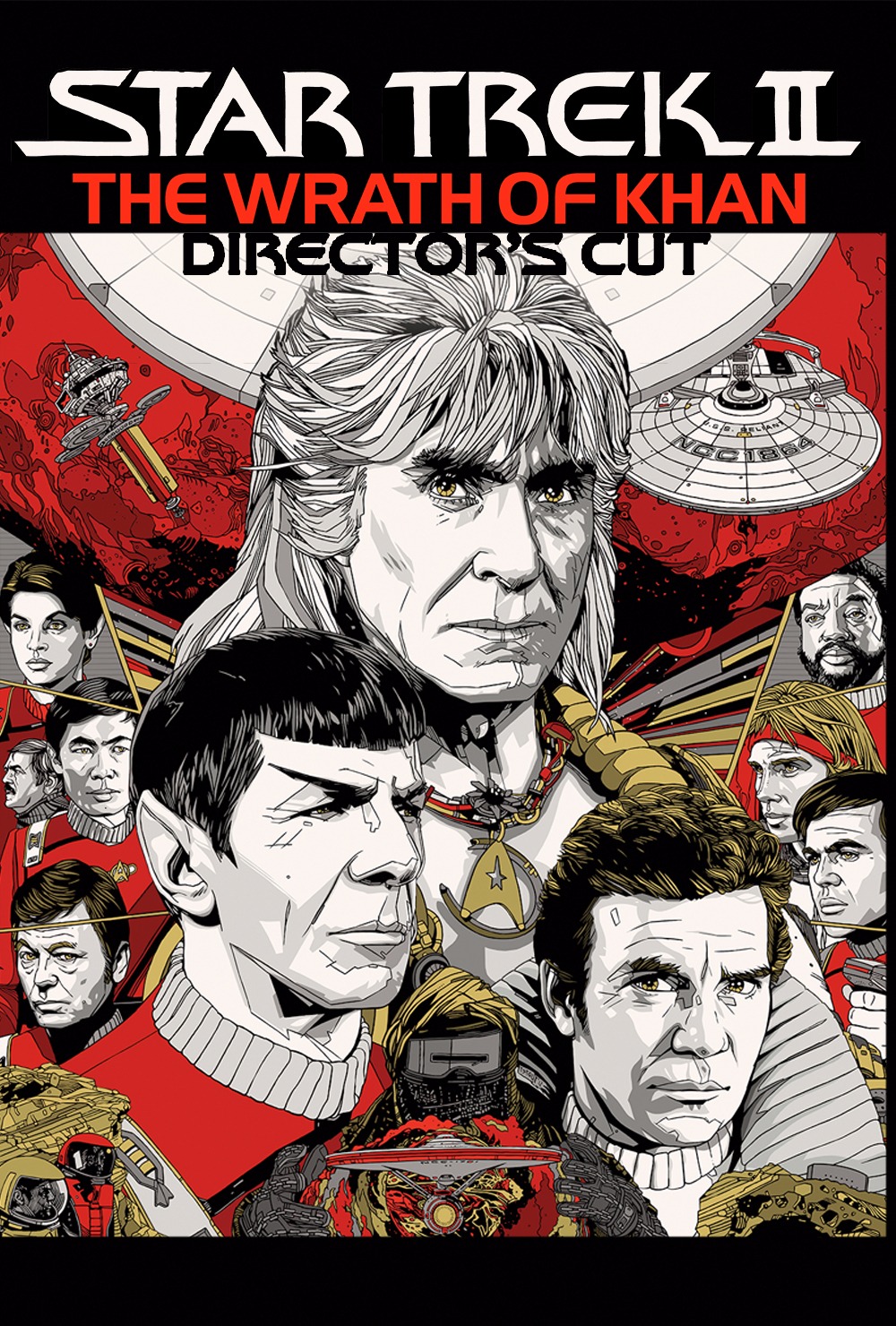 Back on the Big Screen Sept 10th and Sept 13th!

A tremendous treat for Star Trek fans like myself and one of the most celebrated and essential chapters in Star Trek lore, Star Trek II: The Wrath of Khan is now presented in this spectacular Director’s Cut from legendary filmmaker  Nicholas Meyer.

On routine training maneuvers, Admiral James T. Kirk (William Shatner) seems resigned that this may be the last space mission of his career. But Khan is back, with a vengeance!

Star Trek II: The Wrath of Khan is a 1982 American science fiction film directed by Nicholas Meyer and based on the 1960s television series Star Trek created by Gene Roddenberry. It is the second film in the Star Trek film series and is a stand-alone sequel to Star Trek: The Motion Picture (1979). (Wikipedia)

I’ve shared memories of my favorite Star Trek movie before, celebrating the adversarial reunion of Kirk and Khan in this next chapter and look back at the outstanding tv series episode,  “The Space Seed” on which the movie is based. Ricardo Montalban is mesmerizing as the “super-man” Khan Noonien Singh!

Save the date and order tickets here.

See you at the movies! 🍿

“I am jealous of everything whose beauty does not die. I am jealous of the portrait you have painted of me. Why should it keep what I must lose? Every moment that passes takes something from me and gives something to it. Oh, if it were only the other way! If the picture could change, and I could be always what I am now! Why did you paint it? It will mock me some day — mock me horribly!” The hot tears welled into his eyes; he tore his hand away and, flinging himself on the divan, he buried his face in the cushions, as though he was praying.”

If you could, would you, sell your soul for eternal youth?

That was the choice made by Dorian Gray. His story is a classic cautionary tale. Be careful what you wish for.

Dorian Gray (Hurd Hatfield) is a striking and wealthy young man living in 19th century London. While posing for his portrait with his artist friend Basil Hallward (Lowell Gilmore), he meets the cynical and audacious Lord Henry Wotton (George Sanders) who tells him that youth and beauty are fleeting and while he’s young he should entertain every worldly pleasure. Dorian is naive and in the presence of an enchanted Egyptian cat wishes he would stay forever young and only his portrait would age.

While visiting a local pub, The Two Turtles, he meets the beautiful and demure Sybil Vane. She sweetly sings “Goodbye Little Yellow Bird” and Dorian is totally enamored. Falling in love, he asks Miss Vale for her hand in marriage and invites both Basil and Lord Wotton to the pub to meet his love.

When Dorian informs Lord Wotton of his intention to marry Sybil, Wotton suggests he tests her virtue by inviting her to spend the evening with him. If she rebukes him then she’s chaste if she accepts she’s a tramp and as the saying goes “why pay for the cow when you can have the milk for free.” Dorian buys into this plan thus beginning his downward spiral into narcissism and pleasures of the flesh.

Sybil accepts Dorian’s request to stay with him and the following day Dorian sends her a breakup letter expressing his disappointment in her. Heartbroken, Sybil is devastated and Dorian becomes aware of the first signs of cruelty to appear upon his portrait’s face.

Years pass with his peers aging, but Dorian’s youth remains. Gossip swirls and his friends begin to shun him; questioning why his appearance is the same. Dorian goes full tilt debauchery until he finally reaches rock bottom.

There are people today who could benefit from heeding the lesson in the “Picture of Dorian Gray.” The evil you do comes back to bite. Karma is a bitch.

Produced in 1943 at MGM by Arthur Freed and directed by Vincent Minnelli, “Cabin in the Sky” is the 1st all Black film produced by a major studio in Hollywood. “Happiness is a Thing Called Joe” was nominated for an Academy Award for Best Original Song and sung by the film’s star, Ethel Waters.

“Cabin in the Sky” in featuring an all-African American cast was an unusual production for its time. In the 1940s, movie theaters in many cities, particularly in the southern United States, refused to show films with prominent black performers, so MGM took a considerable financial risk by approving the film. (Wikipedia)

Some remember “Cabin in the Sky” for its intelligent and witty script, which some claimed treated its characters and their race with a dignity rare in American films of the time. Others described Cabin in the Sky’s racial politics as the same “old stereotypes of Negro caricatures”.

According to liner notes in the CD reissue of the film’s soundtrack, Freed and Minnelli sought input from black leaders before production began on the film.

When I first saw this film as a kid in the 60’s I was absolutely floored. This was during the civil rights era and I had no idea that in the 1940’s a major production company had taken on the issue of the lack of black representation in film. I understand the point about the stereotypical characterizations – Lena Horne, the aggressive, hypersexual black woman. Ethel Waters, the dutiful, prayerful housewife and “Rochester”, the buffoonish and no account lazy black man.

My feelings of the film are mixed because to some extent, it feeds into the political narrative that some black folks aren’t worthy of equality because they wouldn’t know what to do with it if they had it. But on the other hand, there was finally a film with all black faces, the most gifted entertainers of all-time – Cab Calloway, Lena Horne, Ethel Waters, Duke Ellington, Louis Armstrong and their stories. These characters weren’t just sprinkled in, they were integral to the plot and couldn’t be cut out in racist southern theaters.

As a black woman, it both breaks my heart and angers me that we even needed to have this conversation, not only in the ’40’s but as an ongoing fight for all aspects of African-American representation on-screen.

After years of unavailability, Warner Home Video and Turner Entertainment released “Cabin in the Sky” on DVD on January 10, 2006. I recommend checking it out with this backstory in mind. These legendary artists deserved to have worldwide exposure the same as their white counterparts of the day.

We’ve come along way, but the truth is we still have a long way to go.