I joined the Turner Classic Movies Facebook group which I thoroughly enjoy. Talking about our favorite films, creepiest, classic vs. neoclassical films and which should be shown on TCM.

In our conversation on creepy movies,  “The Black Cat”, Universal 1934, was mentioned and the fact that this member didn’t realize pre-code films had this type of content; mummified women’s bodies in the basement, the proposed torture of skinning Boris Karloff alive, etc. If you haven’t seen it, put it at the top of your must-see list.

In the comments, I suggested in addition to “The Black Cat” to also check out “Mad Love”, Universal, 1935. It stars Peter Lorre and is a total freak fest. Another must-see flick. It stars Peter Lorre as the mad Dr. Gogol who’s obsessed with the wife ( Frances Drake) of a renown pianist whose hands he’s transplanted after a train wreck. Gogol has a definite fetish side and will do anything to have Miss Frances Drake.

I love Pre-Code films because they had so much leeway in terms of subject matter, even wardrobe. I always recommend adding Pre-Code to your film history education. By definition Pre-Code films:

Refers to the brief era in the American film industry between the introduction of sound pictures in 1929 and the enforcement of the Motion Picture Production Code censorship guidelines, popularly known as the “Hays Code”, in mid-1934.

In 1922, after some risqué films and a series of off-screen scandals involving Hollywood stars, the studios enlisted Presbyterian elder William H. “Will” Hays, a figure of “unblemished rectitude”, to rehabilitate Hollywood’s image. Hays, later nicknamed the motion picture “Czar”, was paid the then-lavish sum of $100,000 a year (equivalent to more than $1.4 million in 2015 dollars). (Wikipedia)

Unlike silent-era sex and crime pictures, silent horror movies, despite being produced in the hundreds, were never a major concern for censors or civic leaders. When sound horror films were released, however, they quickly caused controversy. Sound provided “atmospheric music and sound effects, creepy-voiced macabre dialogue and a liberal dose of blood-curdling screams” which intensified its effects on audiences, and consequently on moral crusaders. 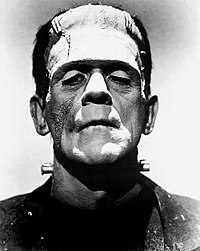 The monster’s brutality, and the doctor’s declaration that “”Now I know what it feels like to be God!”, shocked many moviegoers. By the time of Bride of Frankenstein(1935), the Code was in full effect.

The Hays Code did not mention gruesomeness, and filmmakers took advantage of this oversight. However, state boards usually had no set guidelines and could object to any material they found indecent. Although films such as Frankenstein and Freaks caused controversy when they were released, they had already been re-cut to comply with censors. (Wikipedia)

So, the next time you or anyone else believes that black and white films are a bore, remember to check out “The Black Cat”, or “Mad Love”. If you do, leave a comment; I’d be intrigued to read your thoughts.