Alfred Hitchcock is the “master of suspense” for a myriad of reasons and this opening sequence created by Saul Bass, graphic designer, and Academy Award-winning filmmaker is an epic example of setting the tone and anticipation of what’s to come.

Hitchcock hints at the relationship between James Stewart and Kim Novak by opening on James Stewart’s name above Kim Novak’s lips transitioning into her eyes and the swirling sensation of vertigo. In addition, the beautifully haunting theme music of Bernard Herrmann perfectly sets the suspenseful mood of the film. 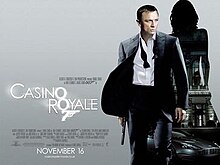 It’s always dicey when you try to recast an iconic treasure like James Bond. Sean Connery was the only Bond I recognized (although Pierce Brosnan definitely held his own) so, when Daniel Craig was announced to fill Connery’s spot, I was definitely skeptical but quickly became a huge Daniel Craig fan. I think he did a great job of bringing just the right amount of attitude, style, and hotness necessary to carry on the franchise.

Casino Royale introduces James Bond before he holds his license to kill through his transition into his 007 status. The opening theme song by Chris Cornell (then-former lead singer of Soundgarden and former lead singer of Audioslave), adds the perfect punctuation with his title song – “You Know My Name!”

One of the coolest, funniest, most irreverent sequences I think I’ve ever seen are the opening titles for one of my new favorite movies, “Deadpool” (2016).

I call Deadpool the anti-Marvel film because its tone goes against the grain of a typical Marvel movie. Ryan Reynolds was hil-a-ri-ous! Although there was plenty of action, Reynold’s deadpan comedy changed the attitude of the film and was priceless. Talked friends into watching who aren’t Marvel fans and after it was over, loved it and said it was totally not what they expected. If you haven’t, give it a chance. I think you’ll enjoy it.

These are just of few of my favorites. Let me know in the comments those that make your list.

4 responses to “Let’s Get This Party Started!”